Naturally occurring lightning in the Earth’s atmosphere releases tremendous amounts of energy in a very short time. Some researchers believe it was a potential catalyst in the start of life on Earth.

University researcher Jeremy Riousset is examining lightning on Mars and its potential role in being a catalyst for life on the planet.

Jeremy Riousset, assistant professor of planetary sciences, started the project, “CAREER: Atmospheric Electricity on Earth and Mars,” on May 1. It is a five-year endeavor that will involve studying the physics and observability of electrical discharges in atmospheric conditions representative of Earth and Mars, with a goal of furthering our understanding of the physics of electrical discharge in diverse environments.

“Is there or has there been lightning on Mars? That is the question,” Riousset said. “Lightning can destroy life, as we know; a lightning strike can cause damage. Lightning can also be a trigger for life.”

The research looks to answer three key questions about planetary electricity: Can geometric factors adequately explain the difference between theoretical and observed lightning initiation thresholds? Can modeling help assess the nature of atmospheric breakdown occurring in the form of upper atmospheric lightning or putative Martian lightning? And can tribocharging – the contact electrification process that enables buildup of static electricity due to touching or rubbing of surfaces in specific combinations of two different materials – lead to the initiation of non-conventional discharges?

Through a collaboration with University of Oregon experimental development researchers Josef Dufek and Joshua Mendes-Harper, Riousset is tapping his lightning discharge research background to use the lightning models on Earth and attempting to transfer them to Mars. This will be done by producing a generalized model of electron avalanche initiated from a hot cylindrical or spherical electrode, as well as creating 3D models of extraterrestrial discharges and estimates of their electric charges and dipole moments, a process where atoms in a molecule share electrons unequally. Riousset also hopes to study the electrification properties of Mars’ dust clouds through a simulated Martian dust storm.

“We cannot put our detection system on Mars, but we can try to reproduce the environment by doing ‘microrepresentation’ of the environment,” Riousset said. “There is a lot that we can develop even beyond the five-year program.”

Riousset is also looking to involve the local community through disseminating academic research outside academia via Astronomy on Tap public talks and creating a summer camp using LEGO Mindstorms to introduce middle-schoolers to programing and space science.

“I want to expose kids to programming, the power of programming a little robot, and the fact that they can do it, it is not something they have to see other people do,” he said. “I want them to find fun in it, not because I’m going to try to make them engineers at age 14, but what I want is to tell them, ‘That is where you start, this is where you learn, these are the tools we are using, and I’m going to expose you to them.’”

While the work is only a month in, the question of whether lightning was a spark for life on Earth is one that scientists have asked for decades. Riousset is now taking that question applied to our planet and investigating it for our planetary neighbor.

“We’ve been investigating that for 60, 70 years now, we still don’t really have an answer, and if lightning has been a spark for Earth, there’s no reason it can’t be a spark for others,” Riousset said. 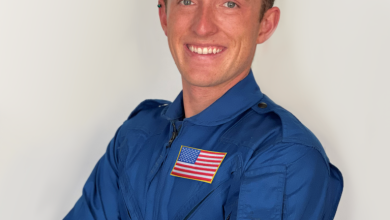