Since Kyle Collins was six years old, civic engagement has been a big part of his life. Collins joined the Cub Scouts organization as a Tiger Cub and like his brother before him, moved up through the organization to eventually earn the prestigious rank of Eagle Scout while still in high school.

After earning the designation he was interviewed by the Orange Observer and in the article Collins recounted how important the achievement was to him.

“The biggest thing is the Eagle project because that’s the culmination of everything you’ve learned in Boy Scouts,” Collins said. “My dad always told me that not getting his Eagle was one of the biggest regrets he’s ever had, so that’s what’s drove me to want to get mine.”

To earn his Eagle, Collins saw an opportunity to dust off his troop’s unused trailer and find a new deserving home for it – the Islamic Center of Orlando. Beneath a thick layer of dust sat a project that 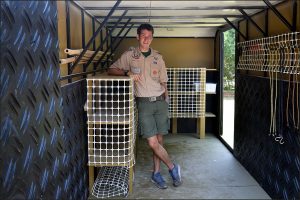 required everything from wiring to welding. For three months Collins worked with friends from his troop and his Civil Air Patrol squadron to give the trailer new life.

“It’s a completely new trailer at this point,” Collins said. “We built shelving units and installed it, painted the floor and the ceiling, we installed new interior lining and plastic sheeting to put on walls and doors, put on weather stripping and repainted the outside.”

Today Collins is a freshman at Florida Tech and continues to participate in civic engagement through his fraternity, Pi Lambda Phi.

“I feel civic engagement is so important because I believe in the philosophy of you get what you give, that being, the more you help others, the more others will want to help you,” Collins said. “Community service has just been a large part of my life for as long as I can remember.”

From Civic Engagement to Science Student

Aside from civic engagement, Collins other passion is chemistry, his major at Florida Tech.

“Chemistry explains how the world works,” Collins said. “If you understand chemistry, then you can figure out how things will happen and you understand more about this world.” 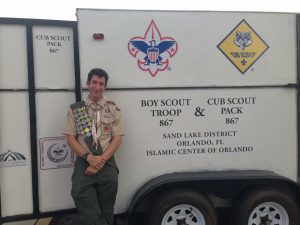 It’s not surprising to learn what Collins plans to do with his chemistry degree.

“My dream job is to be an astronaut and possibly go to Mars,” Collins said.

And he already has something in common with many astronauts. Of the more than 300 pilots and scientists selected as astronauts since the beginning of the space program, 180 were Scouts, 40 of whom share the same Eagle Scout rank with Collins.