A Florida Tech sponsored mural in Historic Downtown Melbourne has become an obligatory Instagram moment for anyone who passes it.

A few months ago, most people driving through Historic Downtown Melbourne paid zero attention to the sides of buildings, not even giving them a second glance. 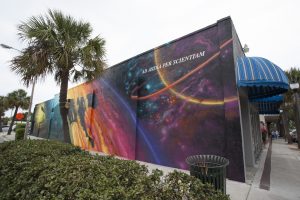 But now it’s hard to miss the vibrant hues and rainbow-like ombre palate of the newly created Florida Tech mural, featuring a larger-than-life panther as he strolls through land, sea and stars, collectively capturing Florida Tech’s past, present, future and overall vibe.

During the summer of 2016, a concrete block wall on the side of the Baby Patch was artist Christopher Maslow’s personal canvas. This particular wall was calling to him over the years, just itching for the stroke of a paint brush and a mist of spray paint.

“As a boy I would pass by the intersection where the mural is now painted, I would stare at the wall and dream of painting a colorful work of art there to share with the community,” Maslow said. “Without Florida Tech this longtime dream would have never become a reality.”

Christopher Maslow is a Miami-based fine artist who earned a degree in product development from The Fashion Institute of Design and Merchandising in 2003. During his residency in Los Angeles, he became a notable clothing designer and produced for multiple labels. A few years into his career as a fashion designer, Maslow found himself gravitating towards street art and then realized a greater calling to fine art. Maslow currently has his work shown in several galleries, is the resident artist at Viophilia, a studio collective, and runs a studio-gallery in his hometown of Melbourne, Florida.

Throughout the project, Maslow endured sweltering summer heat, thunderstorms and a roller coaster of emotions. While a lifelong dream was coming true, at home Maslow was dealing with traumas and triumphs. Within a short period of time, he not only lost a close friend, he also found out his new puppy was critically ill.  Thankfully the puppy made a full recovery and is now excited to welcome a new playmate – Maslow and his girlfriend found out they are expecting their first child.  Those with a keen eye might recognize these personal moments memorialized in his work.

Downtown Melbourne currently boasts six completed murals. This fresco initiative is the brain-child of Melbourne Main Street, an organization whose mission is to fuel economic growth by highlighting why the area is a great place to live and play. Leading the charge is a former Florida Tech employee, and current Melbourne Main Street Executive Director, Jarin Eisenberg.

Melbourne Main Street is part of the National Trust for Historic Preservation, whose mission is to fuel economic growth by developing meaningful partnerships with the community that enhance the physical, cultural and social identity of Historic Downtown Melbourne.

“The objective of this project is to use murals as a catalyst for redesigning our community and redefining our area as a destination for arts and culture,” Eisenberg said. “Public art is an essential component to community revitalization. Art strengthens communities, drives tourism, and fosters an environment of creativity and innovation.”

Finding the right artist for the Florida Tech mural wasn’t hard. Maslow’s creative point of view, genuine personality and individuality made him the perfect choice.

“Maslow stepped in as the curator of the Melbourne Mural Project and was instrumental in getting this mural program, and more specifically the Florida Tech mural, off the ground,” Eisenberg said.  “The respect he has from this community in combination with his artistic drive made him the perfect fit to carry out a project of this magnitude.”

The partnership between Melbourne Main Street, Maslow and Florida Tech, blended into a work of public art that inspires and delights everyone who sets eyes on it.

“It is truly an honor to have the opportunity to collaborate with Florida Tech,” Maslow said. “It is a dream come true in fact.”

For Florida Tech, the symbolism in the mural does a beautiful job of illustrating the university’s incredible location by the Indian River Lagoon, which the school honors through their research efforts. The mural gives a nod to Florida Tech’s roots in space exploration, and to what the future holds for everyone. 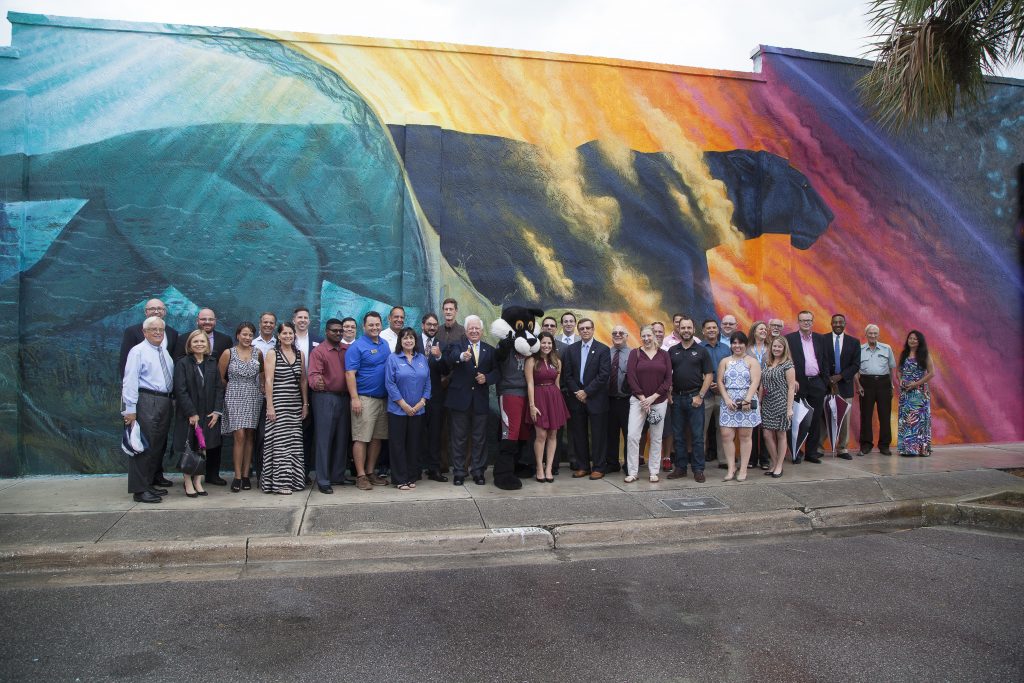 “One of the primary reasons we pursued a Florida Tech partnership for the mural program was to make sure Florida Tech students, alumni and staff know they have a place downtown that they can call their own,” Eisenberg said.  “We love seeing students and patrons take pictures in front of the mural, and we can’t say enough about how the contribution has fundamentally changed the ‘feel’ of our downtown community.”

The once overlooked side of a building is now a beacon for selfies and group photos.

You can also spot other “Easter eggs” hidden throughout the mural that Christopher strategically placed for Florida Tech fans to discover. http://bit.ly/muraleasteregg