John Trefry gives the signal, and the pontoon boat is slowly guided into Turkey Creek from a dock not far from U.S. 1 in Palm Bay, Florida. Amid sterilized plastic bottles, depth readers and other equipment, Trefry, a professor of chemical oceanography at Florida Institute of Technology, is headed out with a couple of researchers to collect water samples on this early summer day. The morning is ideal, with a light breeze and a temperature that isn’t yet to the point of roasting. It’s the kind of weather that lured many to this part of east-central Florida, seeking homes near the banks of the Indian River Lagoon and nearby beaches.

A National Public Radio reporter is among the passengers, and after motoring along for a few minutes, Trefry stops the boat to show her something. He drops a scooper attached to rope into the water and pulls it up a moment later, filled with a viscous, black slime that gives off the stink of rotten eggs.

This, in colloquial terms, is muck. And as simple as it appears, it is creating a very complicated challenge.

Muck is a Growing Problem

The consistency of mayonnaise, muck is widely considered a major culprit in the ongoing health woes of the Indian River Lagoon, the 156-mile long estuary that, with its 2,000 species of plants, 600 species of fish and 300 species of birds, is considered among the most biologically diverse waterways in North America.

This fine-grained, organic-rich sediment (a more scientifically accurate name for muck) is the product of decades of, in essence, growth in the five counties the Indian River Lagoon borders. Grass clippings and yard waste in greater and greater quantity from the growing number of homes have made their way to the lagoon. Since 1950, for example, Brevard County’s population, which is situated along a majority of the lagoon’s banks, has grown from 23,000 to 550,000. The majority of that growth has been west of Interstate 95.

That development’s impact on the natural Central Florida landscape has made it easier for storm water to carry this organic debris, practically unimpeded, into the lagoon.

Paved surfaces do not absorb rainwater, so nearly every drop runs across the surface and into the lagoon, carrying whatever it picks up along the way – from mowed weeds to dog droppings to cigarette butts. After time, the organic part of this waste is munched on by bacteria in the water, turning the matter into the black ooze that collects in piles, some several yards high, on the bottom of the lagoon.

No sea grass can grow where these piles sit, and the muck is inhospitable for creatures used to living on the once purely sandy bottom.

Why is muck so damaging? Trefry said it:

Muck and other organic waste accrued over decades, such as sewage, animal waste and lawn fertilizer, have increased the nitrogen in the water, which serves as food for extreme algae blooms that lead to fish kills when oxygen is depleted as the algae die and decay. Florida Tech studies found about three tons of nitrogen are released from muck in Turkey Creek alone every year.

Too much nitrogen is killing the lagoon.

Looking for Answers about Muck

Trefry’s research is about investigating the best way to remove the muck and restore the lagoon’s natural sediment. It’s not an easy task, in part because there is just so much of the stuff. 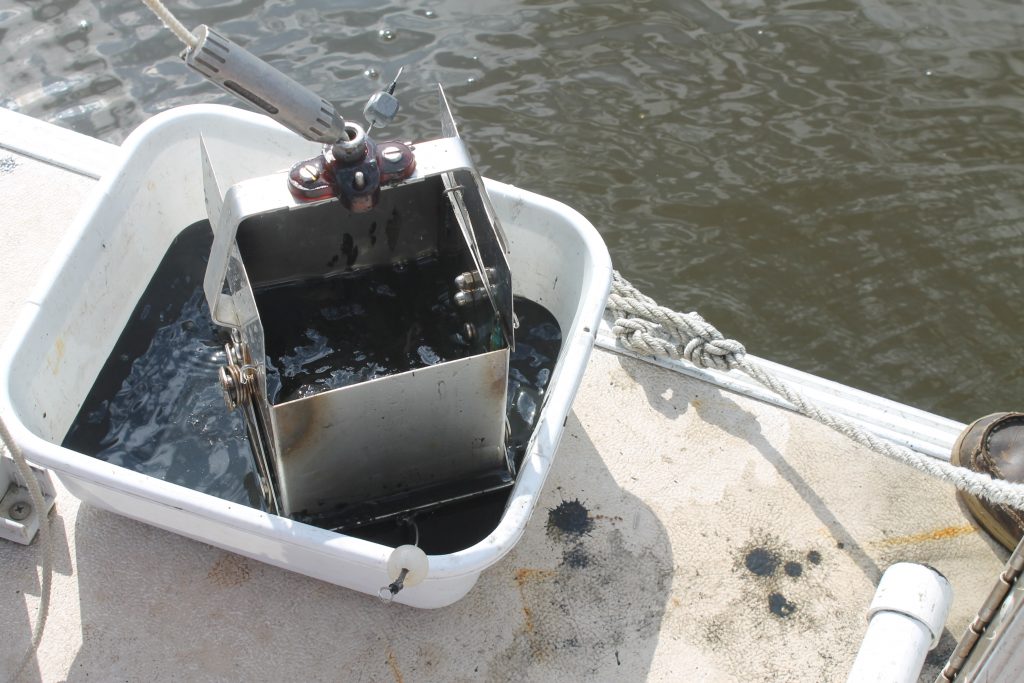 Just in the Indian River between Melbourne and Titusville is an estimated 5 million cubic yards of muck, which is enough to make a wall of muck five feet tall across six lanes of highway that would run for 70 miles.

Whether a half-inch deep or several yards high, sitting in depressions on the floor of the lagoon, muck creates a dead zone lacking the lagoon’s native and critical flora and fauna as it spews out more nitrogen and phosphorous.

After Trefry shows the muck to the reporter, he points to a platform in the middle of Turkey Creek, the thing many hope will play a key role in remediating the mess on the lagoon floor: a huge dredging operation funded with state and federal dollars and overseen by Brevard County.

The platform holds a hydraulic pump that dips into the lagoon and essentially vacuums up the muck. It is siphoned through a pipeline to a spoil site on the riverbank where the offending muck particles can settle, and then the clean water left over can be pumped back in to the lagoon.

Based on Trefry’s calculations, the “legacy load” of muck – the amount accumulated over years of unmanaged runoff – releases at least as much nitrogen from inside the lagoon as what is currently going into the lagoon. Trefry, who first discussed muck in the early 1980s, thinks dredging will help restore a proper chemical balance to the waters.

But there is no quick fix.

Current estimates from Brevard County’s Save the Lagoon plan to pump out enough muck to make a difference will cost the county at least $200 million over a decade. Setting up a dredge in the lagoon also requires clearing many bureaucratic hurdles, which can add months, if not years, to starting an operation any place in water. The hope is through assistance of legislators and agencies the process will eventually become more streamlined.

In fact, the Turkey Creek operation is actually a test to prove dredging works: Trefry and his Florida Tech team are monitoring the water quality in this area before, during and after muck removal.

Though it is among the more high-profile endeavors, dredging is only one prong of a multi-faceted effort to restore the IRL. “Once we dredge the muck, it’s going to come right back in,” Trefry said. “We need to figure out more ways of preventing the muck from entering the lagoon in the first place.”

Mangrove forests and natural wetlands along the banks of the Indian River Lagoon historically acted as a buffer to stop the flow of organic matter into the water, but these natural features have largely been replaced by sprawling suburban lawns and seawalls that don’t stop clippings and fertilizer as they flow into the water.

No Fast Fix for Muck

In order to be successful, the Indian River lagoon cleanup must be a multi-pronged effort, said John Windsor, professor emeritus of oceanography and environmental science who helps oversee Florida Tech’s research efforts.

Windsor believes taking out the muck is important but said the root causes of the lagoon’s ills are more complicated.

“We must fix the problems that exist by going to the source,” he said. “We need to figure out where it’s coming from and do what we can to stop it.”

Brevard County this summer released its Save Our Lagoon Plan for the IRL clean-up that seem to take such a multi-pronged approach. It included reducing pollution and nutrient inputs, continuing muck removal through dredging, and restoring natural ecosystems that act as filter feeders to slow down water entering the lagoon. Two of the best species for doing that, oysters and mangroves, are in serious decline.

“We need to restore the native plants and animals, reduce what we are putting into the lagoon and remove what we’ve been putting in for the last 50 years,” Weaver said, “and that is no small task.”