Majoring in mathematical sciences and humanities, it’s not a surprise Zoe Ashton is interested in math that connects to people. She wants her math to relate to more than numbers which lead her to kidney research.

Ashton’s kidney research helped her build a predictive model to evaluate how chronic kidney disease (CKD)progresses in afflicted patients. The model consists of 19 patterns created from six genomic and clinical factors that doctors can use to help evaluate the progression and speed of the disease. According to Ashton, her model’s accuracy is about 80%.

CKD is extremely prevalent and the damage to the kidneys is irreversible. 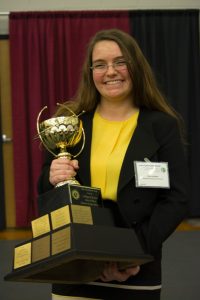 “It’s vital that doctors are able to recognize fast and slow progressors as soon as possible so they can provide effective therapies,” Ashton said. “Keeping doctors in mind, we worked to reduce the number of patterns and variables to a manageable size while still retaining a high classification accuracy.”

The results of this project also relevant to other real world problems; it can be used as a basis for studies to identify new therapeutic targets for drug development.

“I knew that I wanted to do a project in statistics, modelling, or stochastic processes,” Ashton said. “In looking for a project with my advisor, Dr. Subasi, she mentioned that she had a group working on CKD. A project focused on CKD patients, especially considering the disease’s prevalence and severity, was an excellent fit for me.”

Ashton was surprised the original number of variables was very high, and as she reduced the number of variables, Ashton was getting higher classification accuracy, which seemed odd. As she got rid of insignificant variables, there were less false patterns that would be classified incorrectly. According to Ashton, the fewer variables led to a better model in a number of ways.

The data analysis and software Ashton learned will be helpful in her future career. “The soft skills I gained are probably more important,” Ashton said. “Working on an interdisciplinary project helped me learn to communicate with a wide variety of audiences. 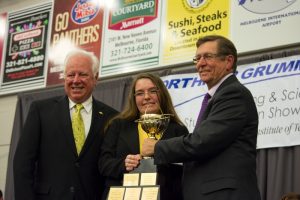 Ashton advises students to start their projects and research early. If students choose a topic in their in their favorite area, they are more likely to enjoy, learn and gain from their project.

“Even if you’re just talking to professors early on, it will make the process much easier, and it will help you drill down to your interests and topic,” Ashton said. “Plus, the earlier you start, the more in depth you can go with your project.”

Ashton believes student design is important because it makes the transition from learning to doing.

“Student design takes all of the classroom-based work and allows you to test it in the real world,” Ashton said. “It motivates you to pursue a project you really care about, which is a vital part of the transition from college to the next step, whether that’s graduate school or a career.”

Ashton’s work won the Presidents Cup for the College of Science in the 2016 Northrop Grumman Engineering and Science Student Design Showcase.