With the fall semester in full swing, there is so much going on to talk about. As I’ve mentioned before, I am currently taking a pharmacology course for my master’s degree in biomedical engineering. A very interesting concept came up in class which hit close to home for me. We recently talked about why Coumadin dosage is so important for patients on Coumadin, a common blood thinner (also known as Warfarin.) Because the Coumadin dosage has strong affects, they have their blood drawn to monitor their drug levels on such a regular basis. I’ve seen what a bother this is, but also how important it is first hand. My boyfriend’s father, Paul, has been dealing with a heart rhythm condition and was put on Coumadin several months ago. At first, he had to go to the doctor’s office to have his blood drawn every other day so they could figure out what dosage was appropriate for him be take. Eventually his office visits tapered off to once every week, then once every other week, but they still monitor his levels even now, months later.

Drug dosage is a very complicated matter for many different drugs because, in some cases, the compound binds readily to blood plasma proteins such as albumin. This causes the dosage of a drug taken orally to be different than the effective dose. For example, eating certain foods can affect the level of Coumadin that is free (not bound to albumin) in the blood because certain molecules in the food (like vitamin K) can displace the Coumadin bound to albumin, therefore the effective Coumadin dosage is higher.

For this reason, Paul was given a list of foods he is not supposed to eat including kale, spinach, asparagus, broccoli and other really healthy foods that contain a lot of vitamin K. In addition to being important with regards to regulating his drug levels, this sounds like a good excuse for him to not have to eat leafy green stuff that doesn’t always taste good – not fair!

The whole concept of drugs binding to plasma proteins is very important to whether or not a drug is approved by the FDA. When compounds are screened to determine what makes a compound a good drug, proper distribution of the drug throughout the body and to its target site(s) is one of the four key properties (along with absorption, metabolism and excretion) called pharmacokinetics. 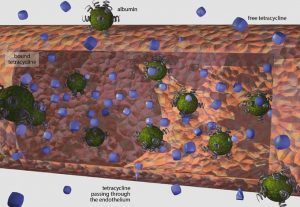 These two images to help illustrate points mentioned here (click pictures to enlarge). The first is an image of a blood vessel with the blood plasma protein albumin (green) and the drug tetracycline (blue). Some of the tetracycline is free within the bloodstream and can leave the vessel to go to its target location, but some of it is bound to the albumin and cannot get to its target site.

One last fun fact – Coumadin/Warfarin is also used in some rat poisons!